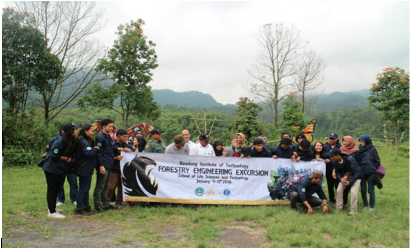 SITH.ITB.AC.ID, Bandung – From Thursday until Saturday(11-13/01/2018), a field trip by Forestry Engineering students from SITH-ITB 2015 was conducted, otherwise known as Excursion. .The Excursion is an annual activity which is also of a routinely held event by college students of Forestry Engineering ITB in order for them to learn more about the field of forestry profession, both in scientific and engineering approach, related to various agencies.

Through this excursion , an overview of the professional world is given after students have experienced their studies in college.  In addition, students of Forestry Engineering ITB are able to learn more about the potential and opportunities that this major has to offer, in correlation to its many professions.  This year which also happens to coincide with the 5thsemester school break, students of Forestry Engineering ITB visited a handful of locations that are linked to forestry, which includes Mount Merapi National Park (located in Jalan Kaliurang, Hargobinangun, Sleman, DI Yogyakarta), Wanagama Education Forest of Gadjah Mada University (Gunung Kidul municipality), and also IKAMAT (located in Edupark Maron Tugurejo Beach, Semarang City). On this field trip , students were accompanied by Dr. Ichsan Suwandhi, a lecturer of Forestry Engineering studies who is also the head of student affairs.

Mount Merapi National Park is a national park that is administratively located in one province and one special region, which are Central Java and D.I Yogyakarta, respectively. This national park functions in the preservation of water sources, rivers and many other supporting systems of life in a few regions such as Sleman, Yogyakarta, Klaten, Boyolali, and Magelang.  The visit to Mount Merapi National Park began with a presentation about the profile and succession process in Mount Merapi National Park after its eruption in 2006 and 2010, more precisely in Kali Kuning. Kali Kuning is located Cangkringan Resort, Sleman district, which is located in the southern part of D. I. Yogyakarta.  The eruption area of Mount Merapi was designated as a national park as per the suggestion of Sultan Hamengkubuwono X.  The establishment of Mount Merapi National Park area was done according to the decree of The Ministry of Forestry, namely SK Menhut 134 / menhut-ii / 2004 on the fourth of May 2004.  Mount Merapi National Park has an area of 6607,25 hectares.  Geologically, this area is divided into 2 parts; the “old” Merapi located at the north and northeast region, which was thought to be 6000 years, and the “new” Merapi, located in the southern part and northwest which is estimated to be 2000 years old.  What distinguishes between the old and new Merapi region is the structure and texture of the soil.  The young Merapi has a more sand-like texture compared to the old Merapi.  Based on the presentation, the old Merapi is supposed to have a high level of biodiversity.  But in fact, the young Merapi has a higher level of biodiversity which is caused by the abundance of water and the fact that the rainfall of the southern part of Mount Merapi is higher than the northern part.  The biodiversity in Mount Merapi mainly consists of 351 species of flora, 301 species of

fauna, and 23 species of fungi. According to the presentation that was given, the eruption that occurred in 2010 was recorded at 300 km per hour, which had a heavy impact on three villages, which were Umbulharjo (the residence of Mbah Marijan), Kepuharjo, and Glagaharjo village.  The process of the slope revegetation occurred once more because of natural succession, until in 2012 where a joint restoration activity with Gadjah Mada University was conducted.  Based on the observation done by the UGM team, the first types of vegetation that sprouted were grasses and reeds, while the trees that were fast-growing and dominant due to the succession process were identified as Acacia decurrens.  Many forms of breathtaking view and landscape were available there.  Besides the mountain row surround =ing Mount Merapi and the mild fog, there were also a few other facilities that were used as a view point for visitors. 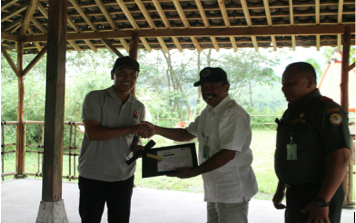 Wanagama Forest is known as an education forest which is run by Gadjah Mada University, so that the students and professors of Forestry Faculty of Gadjah Mada University can conduct experiments in order to find the best way to conserve the forests of Indonesia and rebuild critical lands.  Wanagama Forest was developed as a means for environmental education and a recreational spot for the public community.  A brief description of Wanagama tells us that this site was mainly dominated by teak forests and was very green, but was also overexploited by the Japanese parties during World War II era, until all that remained was rocks.  After it was handed over to the UGM party and reestablished as Wanagama Education Forest UGM, the management was focused mainly on a land measuring 10 hectares, which at the time was very rocky and desolate, the main goal being to restore the land to its original green state.  The very first vegetation that was planted on that land was mulberry plants which would, in turn, produce silk worms.  This would later produce silk fabric which would be the main commodity in order to further develop the remaining forests.  This land measuring 10 hectares would later be known as Plot 5, which was purposely left rocky and desolate as a historical figure.  On that land, there are still Cebreng trees (Gliricida sepium) which stand tall and have roots that could penetrate the rocky bed.  After that land was revegetated, UGM was bestowed an additional land until in measured up to 79,9 hectares.  A social approach to the local people was done in its management process. Furthermore, the technical approach was done by building a terrace in order to preserve the sloping land and prevent landslides.  A plant nursery was also built for pioneer plant species.  In 1983, the total area of Wanagama was 622 hectares.  Wanagama did not only restore the lands to its original green state, but furthermore also preserved the genetic variety inside it. A few species of plants that have been researched in relation to its genetic varieties include mahogany, lamtoro, and sandalwood.  Ever since then, Wanagama was no

longer rocky and desolate. Around the years 1983-2004, Wanagama did a few genetic trials.  Wanagama became a conservation site for non-indigenous plants such as lamtoro and eucalyptus.  Within the same year, the agroforestry system was implemented. According to the presentation given by Mr. Atus, the Secretary of Wanagama Education Forest UGM, there are a few areas, or zones, in the education forest which are adjusted for its use, namely Plot 5 for rehabilitation area, Plot 6 and 7 functions in natural rejuvenation, Plot 15 and 16 is used for Ecotourism, and Plot 19 mainly focuses on agroforestry.

IKAMat is known as a foundation or alumni group which is also a part of KeSEMat UNDIP (Diponegoro University), which aims to establish restoration and life quality enhancement of the local residents of the Mangrove Ecotourism development coasts, other programs include restoration of the coasts in the form of mangrove plantation.  After students of Forestry Engineering had arrived at the location, a warm welcome from the head director and his fellow colleagues was given, in addition to a presentation about the establishment of said foundation and the empowerment of the local coast residents, until the formation of IKaMaT.  Because of the many efforts done, this foundation is now capable of joint ventures with many institutes and also form an independent mangrove plantation group.  The existence of IKaMat is known on a local, national, and even international level, and is not only considered a student organization anymore.  Rather, it is considered a Non-Government Organization (NGO). According to the presentation delivered by the IKAMaT team, there are three mangrove groups based on their location in relation to the shore, consisting of major mangroves (which location is closest to the shore resulting in many of the trees being submerged in the tides), minor mangroves (located even farther from the shore, as a result sometimes it is hit by the tides), and association mangroves.  There are many products which are produced by IKAMaT as part of a joint program with Kesemat and farming group, such as mangrove chips, batik fabric, and many other snacks, all of which uses mangrove as a main ingredient.  Propagul from Rhizopora sp mangrove can produce ink which could be used in the art of batik design, while the fruit of Bruguierasp and Api-Api mangrove is used as the main ingredient for mangrove chips. The land occupied by IKAMaT has an official

ownership in cooperation with A. Yani airspace.  At first, the cultivation activity of mangrove started with training and guidance for the local fisherman.  As time passed by, the local fisherman learned of mangrove cultivation and further developed their skills.  Training also decreased in accordance to the increased independence of those fisherman and farmers in planting.  The plantation location that was chosen, which is the shore that is hit by the ebb and flow of the sea, is considered an ideal location.

In addition to visiting a few institutions related to forestry, as a bonus, the students of Forestry Engineering paid a small visit to Fort Willem, which is a remainder of Netherland colonial era in Indonesia.  This relic gave us, students of Forestry Engineering, a handful of amazing views and more importantly, more than a few spots for taking pictures.  The visit to For Willem also concluded the Excursion activity.  “A great nation never forgets its history”. 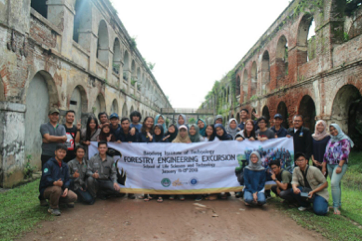 As a forester, the world of forestry becomes the main driving force after students receive their bachelor degree.  Wherever foresters may be, they are expected not only to consider forests on a small scale, but rather the consideration of forests on a much larger scale, which mainly includes the sustainability of the forests.